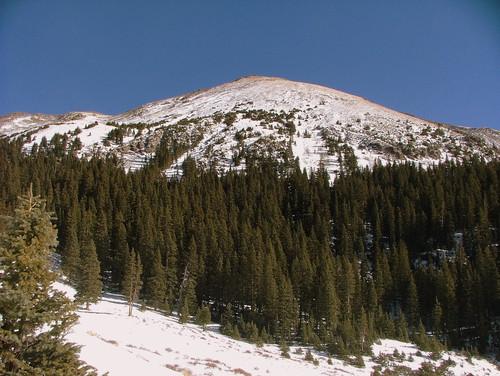 Wheeler Peak is the highest mountain in New Mexico. Located in the Sangre De Cristo (Blood of Christ) range, it stands guard over the southern end of the Rocky Mountains, inviting all to enjoy its status.

It is not known who made the first ascent of Wheeler, probably the Indians of the Taos Pueblo. But, it is named for U.S. Army Major George M. Wheeler who surveyed much of New Mexico in the late 1870s. For years, the Truchas Peaks, located south of Wheeler Peak, were considered the New Mexico highpoint. In 1948, a survey was conducted by Harold D. Walker which confirmed Wheeler Peak is the highest point in the state. A sub-peak, north of Wheeler Peak, is named for Walker and is often mistaken for Wheeler.

Whether backpacking or dayhiking, Wheeler Peak offers a spectacular outdoor experience. Big horn sheep are abundant but are wary of visitors. There are two main routes to the summit, the Bull-of-the-Woods Trail, and the Williams Lake Trail. The Bull-of-the-Woods trail (also called the Wheeler Peak Trail) is 16 miles round trip and is a well-marked class 1 trail, The Williams Lake trail to the summit is approximately seven miles round trip and is a steep class 2 trail, with the final 1000 ft being a rocky scree slope.

The Sangre de Cristo mountain range is a spectacular collection of peaks which stretches 250 miles from Santa Fe, New Mexico to Salida, Colorado.