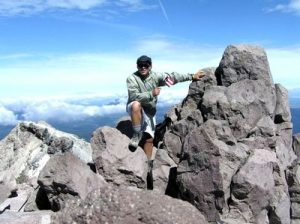 Lassen Peak[3] (also known as Mount Lassen) is the southernmost active volcano in the Cascade Range. It is part of the Cascade Volcanic Arc which is an arc that stretches from northern California to southwestern British Columbia. Located in the Shasta Cascade region of Northern California, Lassen rises 2,000 feet (610 m) above the surrounding terrain and has a volume of half a cubic mile, making it one of the largest lava domes on Earth.[4] It was created on the destroyed northeastern flank of now gone Mount Tehama, a stratovolcano that was at least a thousand feet (300 m) higher than Lassen.

Lassen Peak has the distinction of being the only volcano in the Cascades other than Mount St. Helens to erupt during the 20th century. On May 22, 1915, an explosive eruption at Lassen Peak devastated nearby areas and rained volcanic ash as far away as 200 miles (320 km) to the east.[4] This explosion was the most powerful in a 1914–17 series of eruptions that were the last to occur in the Cascades before the 1980 eruption of Mount St. Helens in Washington. Lassen Volcanic National Park was created in Shasta County, California to preserve the devastated area and nearby volcanic wonders.

Unlike most lava domes, Lassen is topped by craters. In fact, a series of these craters exist around Lassen’s summit, although two of these are now covered by solidified lava and sulfur deposits. Lassen is the largest of a group of more than 30 volcanic domes that have erupted over the past 300,000 years in the Lassen Volcanic center.